Anthony J. Fredette studied classical philology at Fresno Pacific University before pursuing an M.A. and Ph.D. at the University of Toronto’s Centre for Medieval Studies. His work centred on the editing of medieval Latin commentaries on classical poets and the influence which these texts exerted on medieval Latin, French, and Occitan literature. His dissertation, “The Medieval Thebaid,” applied these general concerns to the specific context of Statius’ epic poem on the theme of the Seven Against Thebes, revealing the crucial role played by medieval methods of reading and teaching the Thebaid on – among other genres – the birth of the Old French romance.

END_OF_DOCUMENT_TOKEN_TO_BE_REPLACED 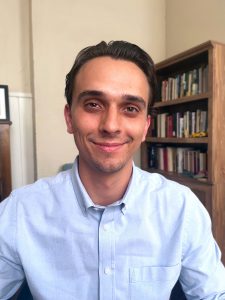 Simon Whedbee received his BA in English Literature from Loyola University New Orleans, with minors in Classics and Medieval Studies. He studied Medieval Latin and Latin paleography at the Centre for Medieval Studies at the University of Toronto, where he earned his MA and PhD. His doctoral dissertation, “Peter Comestor’s Lectures on the Gospel of Luke and its Glosses (c. 1163-8): A Partial Critical Edition and Study,” contextualizes the pedagogical writings of an important medieval exegete, whose teachings on the Bible were influential throughout France in the decades before the formation of the University of Paris.